Portland, OR — Portland-based food chain George’s Burger Joint issued an official statement today reassuring customers that the ingredients they use are “basically the same” despite their new slogan, “Nothing but Phresh Beef.”

“In light of growing concerns over the quality of our ingredients, we at George’s Burger Joint want to restore our customers’ faith in the gourmet burgers that made us Oregon’s finest food chain. Nothing matters more to George’s than excellence. Excellence in service, excellence in flavor, and excellence in craftsmanship. So when we say that ‘phresh beef’ means whatever you think it means, you can be sure that we mean it. We sincerely hope this clears things up for those who are skeptical of our choice of words. Rest easy: ‘phresh’ means exactly whatever it sounds like. Nothing more, nothing less.”

The response has been largely positive.

“Good enough for me!” says Pat Eller of Eugene, Oregon, one of George’s many restaurant locations.

“I had no problem with them before the commercial, so it was like, why would they change ‘fresh’ to ‘phresh’ now?” says Erin Chung, a regular at George’s. “But I feel much better about eating there again since they released that statement.”

Controversy began Sunday night on Twitter after George’s ran the first in a new line of TV promos using the modified slogan. Twitter user @DanHyraxBush was the first to express his suspicion.

Others followed suit as rumors found their way into the narrative: 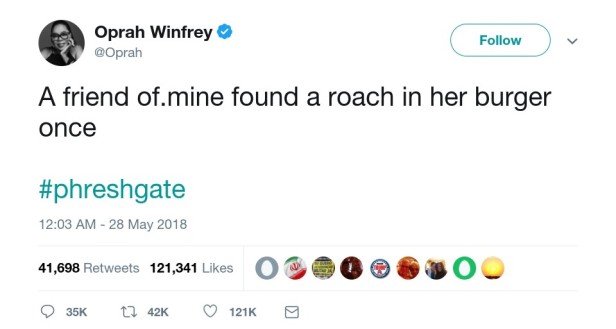 Nevertheless, Dan Bush (author of the first of the above tweets) says his reservations were put rest by the press release. “I’m not a snob or anything, but it was a little off-putting that literally the only thing they changed about their slogan was the freshness thing,” he says with a mouthful of fries.

“I respect their transparency about this. Will definitely keep eating here.”